Text Björn Bischoff
The Notwist are one of the best known and most exciting German indie bands. The two brothers Markus and Micha Acher not only play in this band, but also founded the label Alien Transistor almost twenty years ago. A universe of unusual and special music spreads out with the releases from there – and has long since exceeded its own boundaries.

The story of the Alien Transistor label is the dream of every music lover. Just make records that you like yourself! That’s how Markus and Micha Acher approached it almost twenty years ago. And exactly, it is those two brothers who, with The Notwist, put the Bavarian Weilheim on the international map of adult indie pop at the turn of the millennium.

Which was not the worst condition for their own label: »It offered itself because a friend of ours, Saam, had solo recordings that we found totally ingenious,« says Markus Acher. At the time, the Turkish-born Saam Schlamminger played along for the sessions of The Notwist’s album »Neon Golden« and was an important part of the recordings. »That was the reason for us to make our plan concrete and start with his stuff.« Out came Saam’s self-titled album under the name Chronomad. »And so it went on with stuff that came from our immediate environment – or from ourselves,« says Acher.

Thinking outside the box

In the beginning, everything was open, although The Notwist released perhaps one of the most important albums from Germany with just »Neon Golden«. »Maybe that had a little effect on the Alien Transistor releases,« says the 55-year-old. But in the end, according to Acher, it was about something else: »The Notwist is ultimately just one part of a big universe of all kinds of people. And that’s where we’re taking it from, and that’s how the label is meant to be.«

The Notwist is ultimately just one part of a big universe of all kinds of people. And that’s where we’re taking it from, and that’s how the label is meant to be.« (Markus Acher)

For quite a while, Alien Transistor focused on its immediate environment, on its own stuff or on friends’ material. For example, the joint project 13&God with artists from the US label Anticon is released. »But at some point, which wasn’t as interesting to me personally«, Acher says. The label orientates itself more outward, becomes more international. Contacts outside their own environment approach them specifically about releasing something on Alien Transistor. »That’s when everything picked up speed again and became extremely interesting.«

So working on the label brings inspiration, friendships, and contacts – which at least made traveling in the head possible during the Corona months. »That was great, and I wouldn’t want to miss that.« In general, the label has developed well in recent times with all the releases that have just appeared or are yet to appear.

One thing led to another

Vinyl was always »somehow already« the main medium for Alien Transistor but has become even more so through the last time. The latest releases are accordingly no longer available on CD, but only as LP or download.

Alien Transistor was born in the times of Napster and other file sharing platforms, which were not the best years for labels. And today? People listen to most of their music through streaming providers. Not easy for the music industry. However, according to Acher, the creators of Alien Transistor never dealt with it that intensely. »For us, basically, not much has changed.« The label is more of a hobby. »We do it because we feel like it. But we design it to be self-sustaining«

Notwist, The
Superheroes, Ghostvillains + Stuff
from 25.99€

Just how, specifically, do artists come to Alien Transistor? The paths seem straightforward. »With the ones I didn’t have direct contact with before, that’s how it worked out,« Acher says. »With Jam Money, I ordered the record and started communicating with Mat Fowler because he knew our stuff. At some point I asked if they wanted to release something with us.« In the case of the Japanese band Tenniscoats, contact was made through a label friend from that country. The opportunity for licensing was there, and that’s how things got rolling. The formula usually sounds like this with Acher: One thing led to another. Sometimes stories can be that simple. 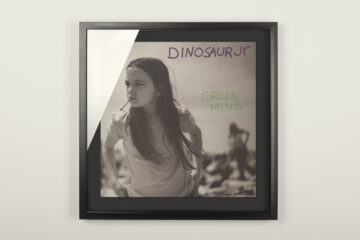