Text Björn Bischoff
Many rock bands recorded their best ever albums in the early 1990s. Including Dinosaur Jr. Although the band was already in the process of breaking up while in the recording studio, their fourth album »Green Mind« is still bursting with creativity.

J Mascis is a man of few words – and many pauses, sighs and yawns. That’s what the free Canadian newspaper The Georgia Straight said shortly after the release of »Green Mind«. The interview with vocalist and guitarist J Mascis that followed this introduction confirmed journalist Steve Newton’s impressions: The Village Voice called Dinosaur Jr America’s best new band. J Mascis replied with a long pause. Note by Newton: It was even in the band’s bio. »I think it was a while ago,« Mascis said. Whether it was an accurate description? Mascis: »No. We’re on the way out.« Which perfectly described the mood of the band. If you still wanted to call Dinosaur Jr, from Amherst, Massachusetts, a band.

in the early 90s, Dinosaur Jr were poised to be the next big thing. Their crashing alternative rock with slacker attitude fit perfectly into the era. MTV, college and all that stuff. With their second album »You’re Living All Over Me« in 1987, Dinosaur Jr. finally found their sound.

Then came »Bug«, the album after the one massive album. Muted rumblings could already be heard there between J Mascis, bassist Lou Barlow and drummer Murph. Mainly because Mascis wanted to push his idea of rhythm too much. Nevertheless, the album became a success and was critically acclaimed. But after the tour to promote that album, it was all over – and Lou Barlow left the band, or the band left Lou Barlow.

»It seemed like he didn’t want to be in the band anymore, but didn’t want to be the one to leave the band, or something like that,« J Mascis said in an interview with Rolling Stone two years ago. »And yeah, he wasn’t contributing anything anymore.« And suddenly Mascis was on his own when the time came to begin recording »Green Mind.« Murph only played the drums on three tracks. Because Mascis had written the parts for Murph – and he didn’t feel like rehearsing them. At least that’s what Mascis said.

Other than that, »Green Mind« is a tour de force by J Mascis, who took over vocals, bass, drums and guitar on the album – and also produced it all. »It sounded a bit strange. It didn’t really knock me out. I like the songs, but something about the production didn’t really grab me,« Mascis said. Nevertheless, the album was released on February 19, 1991 by Sire Records – and is the band’s first major release.

The guitars on »Green Mind«, which is Dinosaur Jr’s fourth album, still come across exactly right today – especially on the remaster. Nothing is too mushy, and the sound is wonderfully contained. The outburst in »I Live For That Look« alone carries the solo perfectly at the close. »The Wagon« comes across as a typical number from the band, because despite all the noise and all the cranked up amps, it’s the harmonies and melodies that make the sound so unique and special. Then the tempo break and powerful drums (by Murph) follow before the guitar takes over again and shreds the song and everything vibrates dynamically.

Compared to the other albums from this time, »Green Mind« maintained a naivety in their sound. There was power and punch, but it didn’t feel like something was forcibly carving a path for itself. Rather, it was the laid back, the relaxed, which revealed itself even in the most hectic guitar solos. As far as Noise Rock can be relaxed. This made »Green Mind« more nuanced as an album that didn’t just have the typical Dinosaur Jr sound. J Mascis gave a first taste with »Flying Cloud« of what he would celebrate years later on his solo album.

In addition, J Mascis’ voice was and is one of the most unusual of its time, second only to Billy Corgan’s vocals. Every word slid over his lips as if he was reading directly from his dream diary.

A year after the release of »Green Mind«, Dinosaur Jr. went on tour – with Blur, My Bloody Valentine and The Jesus and Mary Chain. Artistically, Dinosaur Jr were right at the top of their game. Three more albums followed, but J Mascis remained the driving force and probably the main man behind them. Then the band officially broke up and by the end of the 90s Dinosaur Jr were history. Until their reunion in the mid-2000s. With Lou Barlow and Murph.

J Mascis himself once described the sound of »Green Mind« perfectly, funnily enough in that free Canadian paper at the beginning of the 90s. A yawn was followed by a long pause and the answer: »Easy listening.« And this is still true of Dinosaur Jr’s sound today. Just punctuated by crashing guitars.

»I picture things a certain way
Then go back to it another day
The green mind said it’s okay«
(Dinosaur Jr. – Green Mind) 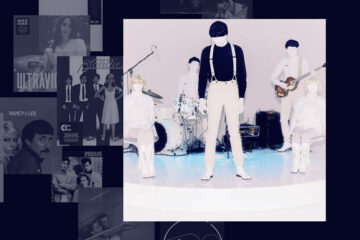