Text Christoph Benkeser
Andreas Vingaard has made it his mission to retell old stories about music. On his record label Frederiksberg, forgotten greats of European jazz or records by unheard singer-songwriters are given an update.

»There are usually disappointments, financial problems or broken friendships associated with the original releases,« remarks Andreas Vingaard, a Swede who lives in Brooklyn. With his label Frederiksberg Records, he is making it his mission to retell old stories about music – even if it is sometimes difficult to convince those involved, he says. »Some don’t want to open up this chapter in their lives, others are already getting on and still others die while we’re working on the project,« says Vingaard.

However, he says, re-releasing records is a way for the Danish-born artist to combine his passion for music and his love of storytelling. Before founding the label in 2015, Vingaard interviewed musicians and helped other music labels with contacts. »At some point I started discussing a reissue of Carsten Meinert’s album ›To You‹ – a pillar of excellence in European jazz – with my friend Søren Skov. We probably could have found a label that would have been interested. But to make sure that no corners were cut and that his music would be presented in the right way, I decided to start Frederiksberg.«

Once upon a time in Denmark

The label was named after the district of Frederiksberg, almost a city within the city of Copenhagen, where Andreas Vingaard grew up. His good friend DJ 2000F – who released a mini-hit on Hyperdub in 2009 with »You Don’t Know What Love Is« – inspired him to do so. Although he now lives in New York, the name connects Vingaard with his own past. After all, his whole family lives in Denmark. Vingaard’s father was never a big music fan and was more interested in history. His mother, on the other hand, liked to dance, but didn’t have a record collection either. »When I was 11 years old, however, she took me to a Bruce Springsteen concert. That was a life-changing experience for me!«

In his adolescence, Vingaard stumbles upon rap. In 1988 he buys his first two CDs, an album by The Fat Boys and the Danish hip hop classic »Den Nye Stil« by MC Einar. Later, he tries to find out where the samples in the tracks come from – the basis for his current work rummaging around for old master tapes and stories of artists who have long since come to terms with their past. This is something that more and more labels are pursuing as a source of livelihood in the midst of a reissue renaissance.

Context is a deciding factor

»There’s a lot of competition, a lot of record labels in the US are looking for reissues of old jazz albums,« says Vingaard.When he looked into re-releasing a record by the US modal jazz band Compass, six other labels approached the group. »Really absurd,« says the head of Frederiksberg. »Luckily no one had the idea of bootlegging the album meanwhile.« A hassle, however, that he recently experienced with the release of the funk classic by Milt Ward & Virgo Spectrum.

After all, some labels do release reissues of these titles, but don’t bother with information about either the artist or the scene. »Obviously, the music is the most important part of the process. But we also need the context. That’s why I always try to build relationships with the people involved and make sure everyone is on board with the project and the liner notes,« explains Vingaard, who stresses how huge this undertaking can sometimes be. »For the release of Adma’s ›Sons of Ethiopia‹ I interviewed nine people, for Milt Ward’s album it was ten. Right now I’m working on an exciting jazz reissue where I’ve spoken to over 30 people. It’s time-consuming, but also incredibly exciting.« 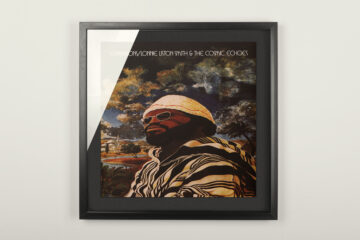